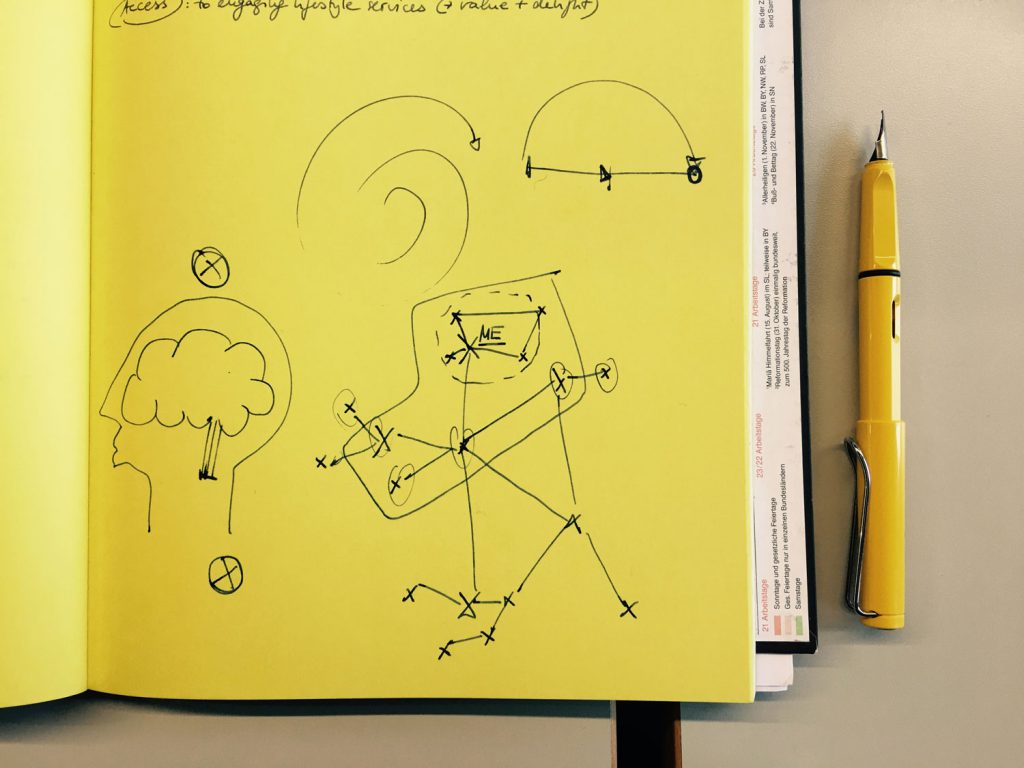 A fresh breeze from the West Coast

My first experience with the concept of user-centered design was at the end of the ’90s. I was working for MetaDesign, which also had an office in San Francisco, and also influenced by my mentor who had studied design management at the IIT in Chicago (Illinois Institute of Technology). In our strategic consulting team in London, and later Berlin, we tried to introduce this fresh breeze to design and thinking into our consulting offer. Our clients back then had not even started to question their own corporate perspective. Nobody was talking about the user back then (at least not in Germany). So nobody was willing to spend any money on an apparently romantic ideas like »user research«. I remember talking back then to an early team member of Amazon Germany about user research and his response was: »I don’t really understand what it’s good for.«

We really believed we could change that mindset, we thought user-centered design was revolutionary and would make the world a better place. There was also a hint of us against them, the young against the old, designers against the establishment. We somehow saw ourselves as the subversive elements, similar to the new school snowboard community that also rose in the ’90s against the old-school skiing establishment (if that’s a proper comparison). Or any other young generation before us breaking boundaries and rules the older generation has set up. Yet most of our clients were not ready to shift their corporate perspective. One of my former bosses in London, a bold young lad in his early 30ies at the time, came back from an automotive client’s presentation which apparently had been quite frustrating, and blurted out, “People who rock the boat will never fit into corporate structures.” Rocking the boat, in a corporate structure, that is, meant nothing more than thinking from the user’s perspective, their life, their habits, their needs, when thinking about brands, products and services. A revolutionary thought. A good thought, back then.

Our clients were not ready to shift their corporate perspective because they didn’t have to. Remember, we are talking about the end of the ’90s. That meant email had just started to become a communication tool in the business world. It was before the iPhone, before social media, before devices became digital and intelligent and started collecting data on a grand scale. It was before huge OEMs could ever imagine becoming a mere hardware supplier over night because some app startup just launched a digital service that connected users directly with what they wanted. That’s exactly what happened: Airbnb (founded in 2008) became the world’s biggest accommodation provider, without owning a single hotel bed. Uber (founded in 2009) became the world’s most valuable mobility provider, worth more than GM and Ford all together, without ever manufacturing a single car.

The role of user experience design

The rise of UX design started with all that, it opened the door for designers to C-level. So what is it that makes UX designers’ contribution so precious? Let’s zoom out and look at where we stand from a bigger perspective. We are just about to leave the ‘industrial age’ behind. An age in which all processes were designed to deliver a mass product a ‘consumer’ would buy and own. Marketing and sales’ role has always been to get people to purchase, and then their job was done. A brand’s role has been to build trust and to make consumers proud of owning something. At the edge of the ‘digital age’, products started becoming intelligent and able to communicate with the ‘user’ via an interface (As physical products, such as cars or all kinds of machines, they have an interface on their own. For many digital products the iPhone became the collective interface – finally we understand what Steve Jobs really had in mind). In this era, a product or service is made to be used – it doesn’t necessarily have to be bought, it might also be licensed or subscribed to. That is shifting the whole relationship between products and users: because the relationship does not end after purchase, it begins with the purchase. A UX designers’ job is to make this relationship happen, and to make it last. To control it through each touchpoint. And to harvest a precious side effect of the interaction, personal data (a bit like bees and flowers). Today, the companies that are able to capitalize on their relationship with customers are the successful ones (as mentioned above, with Airbnb and Uber). And that’s the reason why the UX designers’ contribution is highly regarded.

So what does all this mean in regard to the idea of user-centered design and user experience design? It started as a human idea, an antagonism towards corporate structures, standing in for the user’s perspective. This is still right and valuable. But it has dawned on me that UX designers have paid a price for their new influence and appreciation on companies’ boards. They are indeed the ones who can majorly influence connecting the product with the user, they are the ones who design seamless experiences against all odds. But aren’t they also the ones who are developing patterns that make you literally addicted to a product? The ones who open the front door for users to leave their data and suck them into the ecosystem?

Maybe it’s time to remember what the idea of user experience design was originally all about: keeping the user in mind. That means an approach to design that does not disguise the real business model behind the interface. Because that’s status quo. It’s happening everywhere. It’s happening in the ready-to-disrupt automotive industry: Each electric Tesla driver for example is moving a rolling data collecting machine, helping to prepare the company for its next level as mobility data powerhouse and leader in autonomous driving, as ex-Tesla exec Chris Lattner wrote after leaving the company: »One of Tesla’s huge advantages in the autonomous driving space is that it has tens of thousands of cars already on the road. We built infrastructure to take advantage of this, allowing the collection of image and video data from this fleet, as well as building big data infrastructure in the cloud to process and use it.« Is this a mutually respectful relationship? Wouldn’t that imply laying open the purpose of the relationship in the first place, so that both sides can choose if they want to participate?

From user-centered to community-centered design

In recent months we have heard other critical voices of former tech executives who revealed their personal inner conflicts over what they brought into the world. A former Facebook executive recently spoke up, stating he felt “tremendous guilt about the company he helped build”, and that social media is taking away the social fabric that holds our society together. In a fastco.design article Tony Fadell, one of the minds behind the iPod and the iPhone and founder of Nest, said, he “woke up in could sweat thinking, what did we bring to the world?”. He told the story of a bunch of young male Silicon Valley designers who wanted to invent the perfect product, one that would enhance the user. Not a single thought went towards the community or the kids, and what the product would do to them. Now that Tony and his generation have kids they would understand the social impact these technological devices have. Had they have been able to think that way back then, or had their teams been more diverse regarding different ages or sex, the product and the design process would have been far more community-centered, rather than user-centered. You see the result of their user-centered design approach when you look around in public places. People staring at their iPhones, dragged away by UX schemes that let them forget their own will, while walking, while driving, while eating, together with friends and family.

Isn’t it time to heave the concept of user-centered design onto the next level, community-centered design? A responsible and unified approach, not merely enhancing the single, self-optimized user, but focusing on the community and living together as a society. It wouldn’t lead to another food delivery service, but to ideas such as Nesterly, a start-up for intergenerational homesharing that brings together the young, striving to study in a city they might not be able to afford, and seniors, lonely people who can provide living space. A community-centered design approach would shed new light onto the way we eat, buy, share, commute, travel, pollute, live and love. It’s an experiment in thought. As designers we always have been able to visualize a future that is not there yet. And as designers we are able to comprehensively bring this new thinking into our projects. That would not necessarily make the world a better place right away. But your very own community is a start.